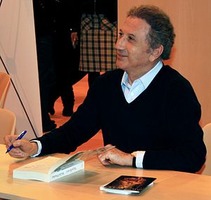 Michel Drucker, CQ is a popular French journalist and TV host. He has been on screen for so long and so permanently, that he once said that some people... Wikipedia